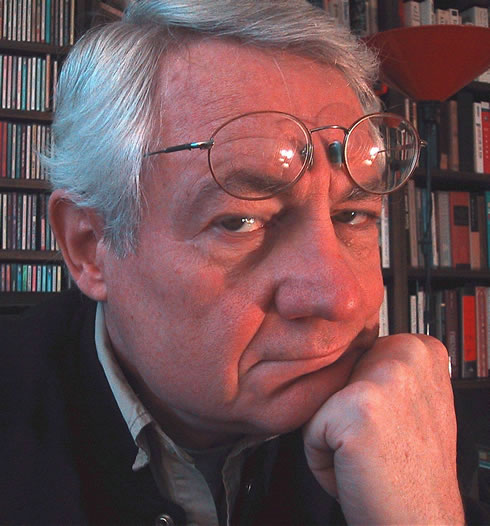 Roy Blount Jr. is the author of twenty-four books, about everything from the first woman president of the United States (back in 1992), to what barnyard animals are thinking. Latest is Save Room for Pie, from Farrar, Straus and Giroux. Before that was Alphabetter Juice: The Joy of Text, a followup to Alphabet Juice.

He comes from Decatur, Georgia (see his 1980 book Crackers) and currently lives in New Orleans (see his Feet on the Street: Rambles Around New Orleans, which the New York Times called “a wild, unpredictable ramble through a wild, unpredictable town”) and western Massachusetts (see Long Time Leaving: Dispatches From Up South, which won the 2007 nonfiction award from the New England Independent Booksellers Association).

He is a panelist on NPR’s Wait, Wait . . . Don’t Tell Me, ex-president of the Authors Guild, a usage consultant to the American Heritage Dictionary, a New York Public Library Literary Lion, a Boston Public Library Literary Light, and a member of PEN, the Fellowship of Southern Writers, the Georgia Writers Hall of Fame, the Vanderbilt University Student Media Hall of Fame, and the Rock Bottom Remainders. He was a member of the American Heritage Dictionary Usage Consultants Board, which has sadly been discontinued. He won a Rockefeller Foundation residency at Bellagio, Italy, and the Thomas Wolfe Award for lifetime achievement from the University of North Carolina.

His first book, about hanging out with the Pittsburgh Steelers, About Three Bricks Shy…And the Load Filled Up, now available from the University of Pittsburgh Press, was named one of the ten best sports books ever by Jonathan Yardley of The Washington Post –and called, by Adam Gopnik in The New Yorker, “the best of all books about pro football.” Dwight Garner in the New York Times recently wrote that “this book isn’t just a classic of American football writing but the classic of American football writing, and a book that deserves a place on the short shelf of the cracked masterpieces of New Journalism.” He added that Blount was “once” (not anymore?) “the Randy Newman of American letters.”

Norman Mailer said of his second book, Crackers, “Page for page, Roy Blount is as funny as anyone I’ve read in a long time,” and Time placed Blount “in the tradition of the great curmudgeons like H.L. Mencken and W.C. Fields.” Garrison Keillor said in The Paris Review, “Blount is the best. He can be literate, uncouth and soulful all in one sentence.” Playboy said he was “known to the critics as our next Mark Twain.” Whether, on the one hand, it is his place to quote these plaudits and whether, on the other hand, he feels that they are adequate, are questions not for him to answer at this time.

His one-man show at the American Place Theatre was described by The New Yorker as “the most humorous and engaging fifty minutes in town”–which, when you stop to think how many fifty minutes there are in New York at any given time, is something. In l988 he expanded that show into Roy Blount’s Happy Hour and a Half. He has performed for Folk Tree Concerts and at Chet Atkins’ Celebrity Golf Tournament, and introduced Chet in Carnegie Hall. He has appeared on A Prarie Home Companion frequently and on CBS Morning Show, Tonight Show, David Letterman Show, Good Morning America, Today Show, Larry King, Politically Incorrect, and in a series of TV spots for the NBA starring Bill Murray, which he helped Murray create.

He writes a regular column for Garden and Gun magazine, and has done so in the past for The Oxford American, Esquire, The New York Times, Atlanta Magazine, Inside Sports, The Soho News, Men’s Journal, Conde Nast Traveller, The San Francisco Examiner, Spy and The Atlanta Journal. His essays, articles, stories, verses and even drawings have appeared in 171 different periodicals including The Atlantic, The New Yorker, Gourmet, Playboy, Vanity Fair, GQ, Life, TV Guide, Vogue, Rolling Stone, National Geographic, Antaeus, Smithsonian and Organic Gardening; and in 233 books, including The Best of Modern Humor, The Oxford Book of American Light Verse, The Norton Book of Light Verse, The Ultimate Baseball Book, Classic Southern Humor, Sudden Fiction, The Elvis Reader, Russell Baker’s Book of American Humor, Baseball: A Literary Anthology, The Sophisticated Cat, The F-Word, and Best American Essays l997. This work has taken him to China, Uganda, Iceland and every state but Alaska. He has written introductions to books by Erskine Caldwell, A.J.Liebling, Ernie Bushmiller Jr.and Phil Rizzuto, and to four different books by Mark Twain–in particular extensive foreword and afterword accompanying first book-form publication of Twain’s story A Murder, a Mystery and a Marriage (2001).

For Sports Illustrated, where he was a staff writer and associate editor 1968-75 and later a Senior Special Contributor, he has rafted the Amazon (attacked by piranha), played baseball with the 1969 Chicago Cubs (hit a ball 350 feet), become all but athletically a virtual member of the dynasty-years Pittsburgh Steelers, and hung out with Wilt Chamberlain, Yogi Berra, Reggie Jackson and the world’s oldest then-living lifeguard. (Though not all at once.)

He has written the screenplay of Larger Than Life starring Bill Murray, the lyrics of a song Andie MacDowell sings in Michael, and an HBO fairy tale, The Frog Princess. Of his two one-act plays produced at the Actors Theatre of Louisville, one became part of an Off-Broadway review. In films he has portrayed a reporter, an outraged grocery shopper and a partygoer dressed as Truman Capote; on TV, a dim-witted talk-show caller and a Cuban soldier; on radio, the Prodigal Son, Orpheus, a ship’s captain named Blauggh, a foolish virgin, Millard Fillmore and Thoreau. He has read or lectured at colleges from Harvard to Clemson to Washington State; at the 92nd Street Y, Symphony Space, Manhattan Theatre Club, Theatre for a New Audience, San Francisco’s City Arts and Lecture Series, the San Diego Forum and the Mark Twain House. Journeyed down the Mississippi River for the documentary The Main Stream, aired by PBS in December ’02. Appeared in a cameo in the first season of Treme.

He has jumped out of a plane, graduated (conditionally) from race-car driving school, scuba-dived with sharks, sung on stage (as a member of the authors’ rock band Rock Bottom Remainders) with Bruce Springsteen and Stephen King, hit a game-winning Texas Leaguer (and had limes thrown at him) in Venezuela, caught catfish with his bare hands in Illinois; and ridden a camel in Kenya, a dolphin in the Florida Keys, an elephant in L.A.

Husband of painter Joan Griswold, father of social worker daughter Ennis and director-writer-actor-songwriter son Kirven (with whom he wrote and appeared in a five-minute film on extreme sports for ESPN), grandfather of Jesse, Noah, Elsie and Amos. Only one companion animal at present, but he is an excellent one: Jimmy, the bayou volunteer cat.